Event of the Month: Dafabet help bring Box4Kids to Scotland

Event of the Month: Dafabet help bring Box4Kids to Scotland

Four young Celtic fans were the first children to enjoy a Box4Kids experience north of the border earlier this month. Thanks to a donation from international betting company Dafabet, the boys were given the fantastic opportunity to enjoy VIP hospitality in the Director’s Box at Celtic FC for their clash against Inverness Caledonian Thistle FC.

The boys were nominated by Glasgow Children’s Hospital and Dumfries and Galloway Royal Infirmary. Battling life-limiting illnesses such as lymphoma, cystic fibrosis and kidney impairments the box provided a comfortable space for the boys to soak in the famous Celtic atmosphere whilst cheering their team to the 3 – 0 win which increased their lead in the Scottish Premier League. 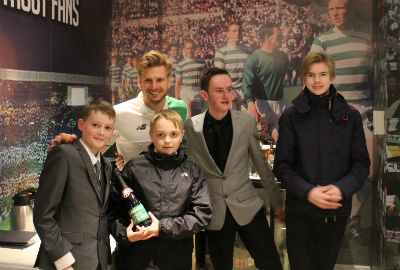 As guests of the club’s main sponsor, the four boys also got the honour of selecting Dafabet’s “Man of the Match”. After being a catalyst force for a lot of Celtic’s attacking play, covering a lot of ground in the midfield and assisting in the final goal, the guest’s clear choice was Stuart Armstrong. After the game Armstrong came by the box to greet the boys, who were thrilled to present him with the prize and take some photos!

We were delighted to bring Box4Kids to Scotland for the first time, and provide a group of deserving Scottish children with an unforgettable VIP experience. We cannot thank Dafabet enough for their generous support.

If you have an executive box and would like to make memories for deserving children throughout the UK we would love to hear from you – contact us now!